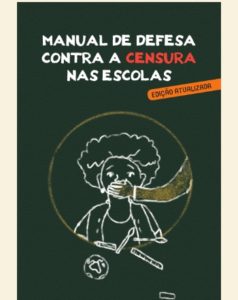 E-mail of the project: professorescontraoesp@gmail.com

Brief description of the Project:

The project Teachers Against School Without Party (PCESP) consists of a group of researchers who decided to come together to produce academic reflections about movements censoring teachers in Brazil. The initiative is interested in all stages of education, but the focus of its actions is basic education (elementary and high school). We understand that in this stage of education, the only one that is universalized, is where the most serious cases of censorship are concentrated, besides the fact that it is also where the most precarious professionals are found; the focus on basic education also becomes urgent since censorship in is this area less studied and less challenged.
The name of our project refers to the main group organized to curtail the freedom to learn in the country, the Escola Sem Partido (MESP) movement. Started in 2004 by propagators of neoliberalism in the country articulated in the Liberal Institute of Brasilia, the MESP, in 2014, transformed its demands into a bill at the request of the then state deputy for Rio de Janeiro and currently senator, Flavio Bolsonaro, son of the current president. The bill created by the movement, dedicated to fighting “ideological indoctrination” in the school environment, was replicated in several states and municipalities across the country, making the legislative houses a battleground between education and censorship. Over time, in addition to these projects, others were presented specifically against debating gender in schools and against the rights of the trans population, such as the use of the use of bathrooms according to the self-identified gender. That is why today there are hundreds of pro-censorship bills being processed in legislative houses all over the country, bills that were mapped by us from an initial mapping made by one of us in the dissertation “School without Party”: relations between state, education and religion and the impacts on history teaching. Actions against these censorship projects in education have also been recently taken to the Supreme Federal Court, the highest judicial body in the country, which has reaffirmed more than once, against censorship, the right to education guaranteed by law. The study of this diffuse censorship is one of our main goals today.